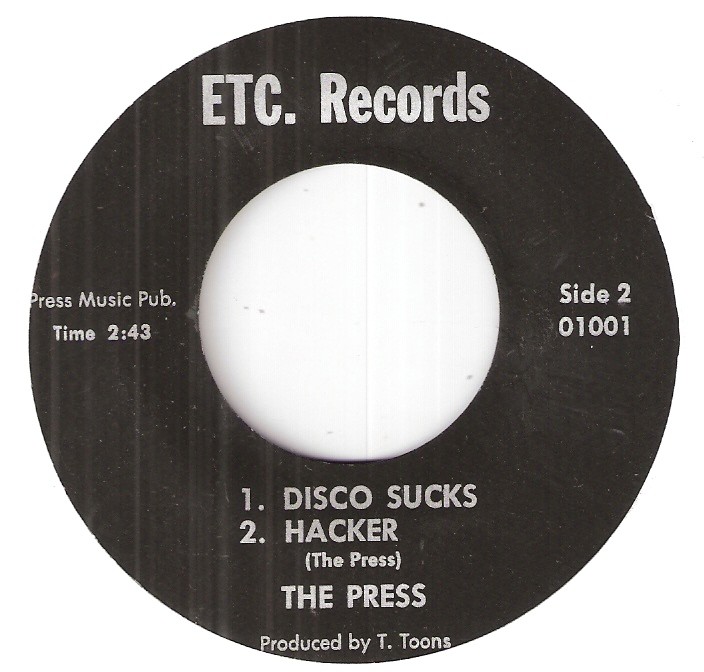 All copies were sleeveless, presumably, which means that band information is scant.
And it really doesn’t help that there are no specific names given in the songwriting
credits on the labels- it’s just credited to “The Press” on both sides.  But at least
we know that the world-famous “T. Toons” produced both sides, whoever the hell he was!!

The first time I (and probably many others) heard of this record was when the best song on the record, “Hacker”, appeared on the great No One Left To Blame comp LP in 2001.  I am guessing that copies of the EP- even though there might not have been many floating around back then- sold for next to nothing before their comp appearance.  Since that time, copies have spiked as high as $700(!) on eBay (back in 2004 or a minty copy) and as low as $89 (just earlier this year for a more beat-up copy).  Gotta love the price range, LOL.

I know nothing about the band, other than the fact that the song “Disco Sucks” was written by one “P. Donahue” (finding that out took some digging around!) and the drummer on the EP was Dusty Watson who went on to play with the Stepmothers and then a lot of rock, metal (Lita Ford in 1983, anyone?) and surf bands. In fact, he currently plays drums for latest incarnation of Seattle’s famous Sonics (!?!).

“Jimmy Jimmy” is a more traditional rock song, played at a slower pace (but with some very strong drum parts from Mr. Dusty Watson!), and is actually an anti Jimmy-Carter tune. They even go so far as to say something like “Nixon did a better job than you” (!).  Ouch- pretty bad indictment!  “We Dig Nixon”, perhaps?!  I don’t think the band was approaching it from a conservative, pro-Nixon stance but I think they just didn’t like Carter so perhaps they were disappointed liberals or something.

“Disco Sucks” is my least favorite song on the EP and also appeared on the mostly-crappy The Insane Darrell Wayne’s No Disco Album comp LP.  The only decent tracks on that 15-song LP are The Vectors; the Tokyos (with a non-EP, comp-only track); and The Bags disguised as “Sgab From The Planet Zed”.  Kinda ironic how a comp complaining about crappy music actually was pretty bad itself.

“Hacker”, the last song on the record, is a ripper and quite a quick, raw workout with more strong drumming from Mr. Dusty Watson.  And nice distorted- and almost growling- guitars including a good tinnitus/mosquito sounding solo in the middle.  They really let loose on this one, thankfully.  And I love the drum/guitar trade-off near the end of the song, nice way to close it out.

At least they nailed it on one song.  [And as a sidenote, isn’t that just what we enjoy about the whole KBD thing sometimes?!  You find a mystery record, wait patiently through a few so-so songs and hope that you’re going to find that one gem of a track (usually the last song or a piss-take afterthought) that makes your day.  I mean, of course it’s nice to hear a 7″ with all solid songs on it but, for me at least, it’s nice to find that one blazing song that was probably a happy accident of sorts.  ‘Cuz it begs the question, what caused them to let loose and get all over-the-top on that ONE song??  Was it a feeling of “We have nothing to lose anyway so we might as well let it all hang out for a few minutes”???]

Thanks to A.W. for helping provide rips of this one way back when!

P.S. Anyone have rips of that 2nd Press 7″, of which only about 10 test pressings exist and which was never officially released?  It’s been on my mp3 want list for a while, and the songs on it are “Hostage in the Embassy” and “President’s Wife”.  How 1979/1980 of them to have a song referencing the Iranian hostage crisis.  Perhaps it was another way for them to criticize Jimmy Carter (?). And maybe President’s wife refers to ol’ Rosalynn Carter…

Mr. Hobbs and The Gargoyles
The Normals

One thought on “The Press”