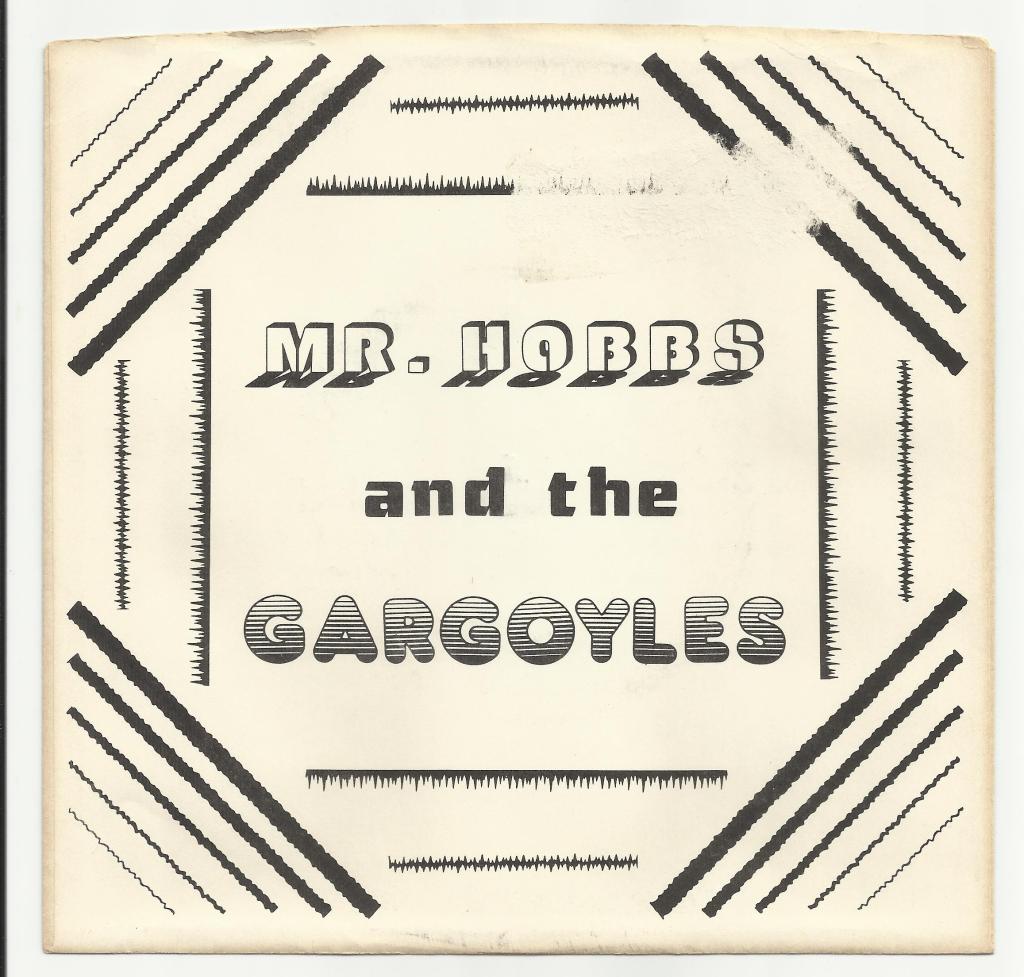 Minimalist, homemade artwork and I love how Mr. Hobbs has the 3D/shadow effect and the Gargoyles is in a total cheesy early 80’s font complete with “dramatic” horizontal
lines and shading.  For some reason that font brings back a lot of memories from that era to me like the TV show That’s Incredible or something. 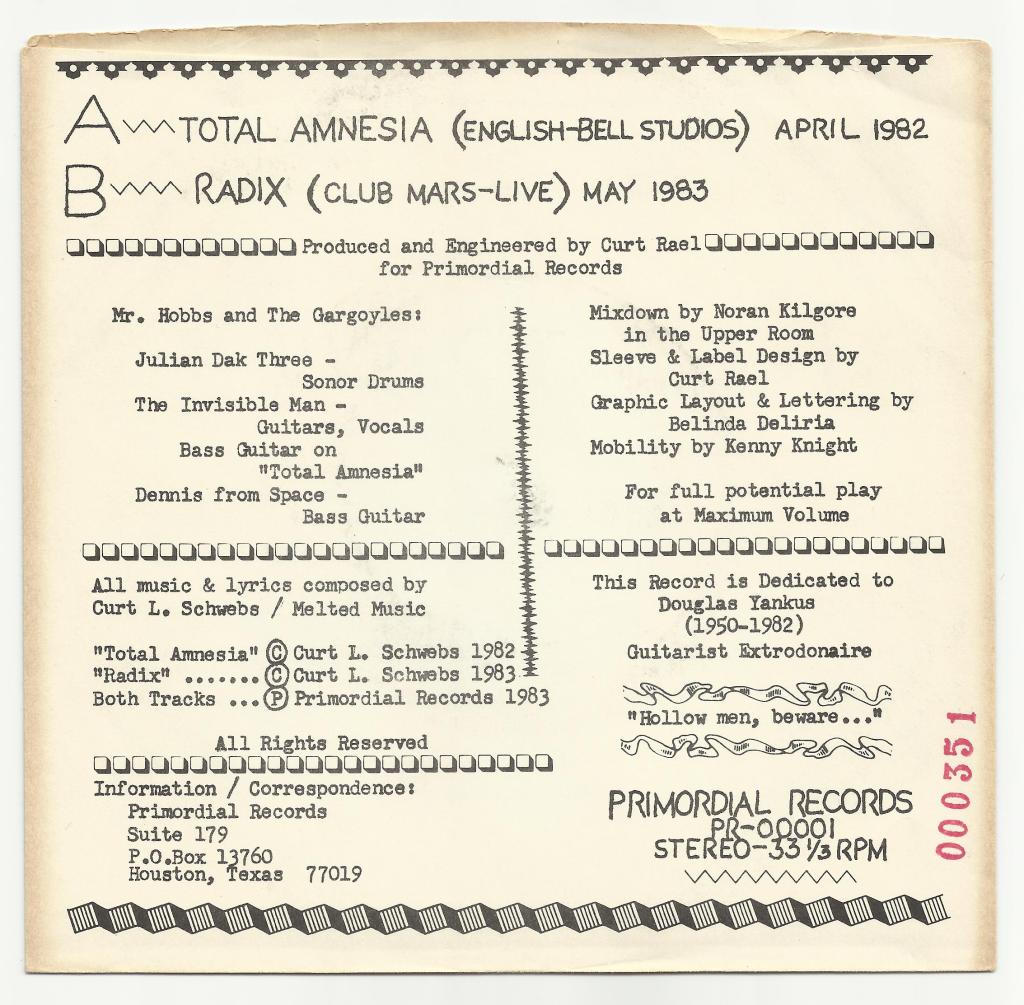 This copy is stamped #351 with what I am assuming was one of those hand-held stamping machines that automatically advanced to the next number for you (I used to love pounding on those things back then when I used them for school projects many years ago).  I guess that approach is less strenuous on your hand that handwriting each number with a pen, eh.  But how many total copiesof this record were pressed?  500? 1,000?  The record stamping device was set to go up to a max of six digits, or 999,999 total, but I doubt that many copies are out there. 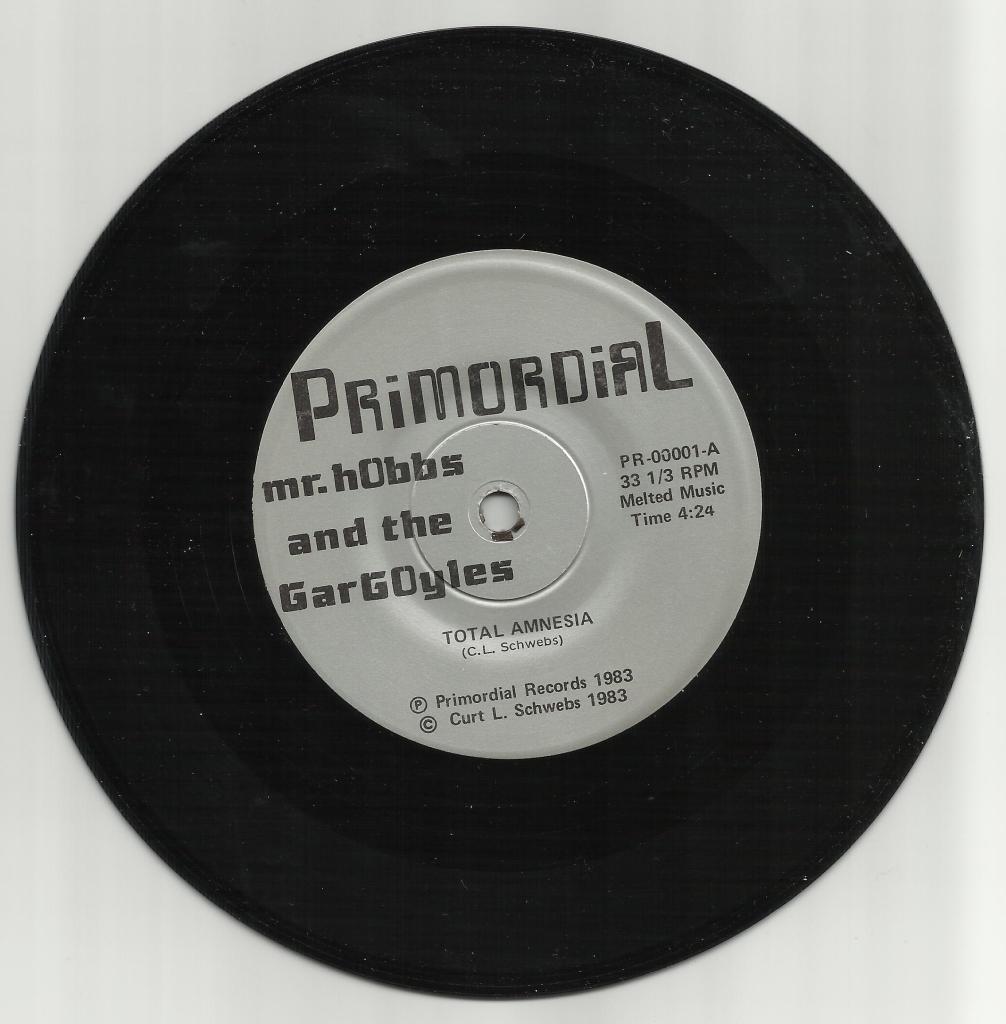 I likes how these labels look with the black lettering over the silver background, and the font used for the Primordial label and band name.  The label’s logo looks like one of those ancient computer-type fonts that are now all the “retro rage” in 2014.

Not a punk record or band but I think this is one of those outsider, homemade type of records with the do-it-yourself spirit and quirkiness that appeals to some punk fans (at least this one, eh).  And you gotta love the band name- who the hell is Mr. Hobbs and why was he associating himself with some gargoyles?!  Must be some inside, “wink wink, nod nod” band joke that none of us are privy to.  “Total Amnesia” is more of a psych song but maybe when it came out it fell into obscurity and/or was ignored because it was “too punk for psych fans but too psych for punk fans” and couldn’t find a big audience in either camp (?).  [I wonder what the Houston punk crowd (Really Red et al) thought of Mr. Hobbs, if they knew about them at all back in ’82/83].  Plus the song length of 4:28 is very un-punk.  And then the flip is 7:27- ouch!  Way way more than the “2:36 max” song length rule for punk.  I am not really into the flip, “Radix”, but more about that tune later.  I want to concentrate on the song that continues to grow on me since I first heard it about 3 years ago (thanks again C.S.!), “Total Amnesia”.  I think the combination of the thin production, whiny guitar noodling, in-the-red bass playing and soft-spoken, whisper-y vocals hits it right on the money.  I find myself tapping some of the catchy drum parts that were probably purposely meant to have a hypnotic quality to them and the chorus is also catchy and hummable.  Charming little ditty and nothing over-the-top (not that it was meant to be) and really solid tune.  Too bad Total Amnesia has remained so obscure since it came out over 30 years ago.  The instrumental flipside, “Radix”, is rounounced like “Radicts” (‘member that late 80’s NYC band of the same name?) and not the phonetic pronunciation of “Ray-dicks”- at least the band says “Radicts” at the beginning of the song.  It was recorded live and maybe some of the punch was lost in the live recording process or something because this tune does not really grab me.  It kind of meanders along for me at a mediocre pace- and really feels like it’s over 7 minutes!  And maybe the absence of any vocals takes away some of the “umph!” it may have had if singer/guitarist/band leader “The Invisible Man” (aka Curt L. Schwebs) had sung on it.  Oh well, can’t win em all.  At least the A-side is a memorable one!

ENDNOTES
I tried digging a little deeper and couldn’t find out much about the band.  I found out that singer/guitarist/songwriter/band leader Curt L. Schwebs (credited on the back of the sleeve in the band lineup as “The Invisible Man”) also played bass for a stint in the Houston “rock, punk and dance music” (?!) band The Businessmen sometime during the 80’s or 90’s.  On that Businessmen site, I also happened to notice that someone credited on the back of the Mr. Hobbs sleeve, Kenny Knight, had a stint playing drums in that other band too.  I have heard that some (how many?) copies of the Mr. Hobbs 7″ surfaced about 4 or 5 copies ago, supposedly from a band member or associate (which one?).  A few copies have been sold on eBay over the years, some of them out of Wisconsin, so maybe a former band member or
someone associated with the band relocated at some point from Texas to Wisconsin with some unplayed copies of the record in hand (?).  It’d be great to hear the back story behind Mr. Hobbs and The Gargoyles, or any interesting info about them, so if you know anything please post a comment.

And on the back of the sleeve there is a memorial to Douglas Yankus who died in 1982 at the age of only 32.  So I looked him up and found out that he was in some late 60’s/early 70’s Wisconsin psych band called Soup that psych fans are into and that he actually died from complications related to diabetes.  An interesting aside, but nothing to directly do with Mr. Hobbs and The Gargoyles.  I am grasping at straws here…